An Inc42 Plus Story

As per DataLabs estimates, the average percentage of layoffs in the total workforce in Indian startups is 22% with unicorns leading the pack

With employee wages becoming a big burden, startups have to resort to ESOPs and appointing cofounders from among the ranks to retain talent

Given the rising number of Covid-19 cases and the uncertainty over the vaccine, the negative sentiment of the investors is also expected to remain in place

While there are plenty of positives to take away from India’s flourishing startup ecosystem, job security and stable employment are not among them. In fact, the high incidence of failed startups in the early and growth stages have made startup job losses ubiquitous and commonplace. A Stanford University study conducted on a dataset of 158K startups around the world concluded that early-stage startups tend to destroy more jobs than they actually create in the long run.

But all of these cannot be blamed only on entrepreneurs — the overall ecosystem which has for long promoted business expansion at the cost of profits and margins was poised to run out of venture capital fuel at some point. Since the dawn of the Covid-19 pandemic in India, the venture capital deal flow in the Indian startup ecosystem has dried up significantly. In a recent analysis, we found that Indian startups secured almost 68% and 33% less funding in May compared to the same in 2019 and 2018. This is the lowest funding secured by Indian startups in May in the last five years.

As a result, the startups even in sectors which haven’t been significantly impacted by the pandemic have been forced to take measures such as — layoffs, salary cuts and halting salary hikes and bonuses. Surprisingly, the layoffs were not only limited to early-stage startups but celebrated game-changers such as Ola, Swiggy, Curefit, Zomato have all shed employees in chunks. This shouldn’t come as a surprise as, except Ola, these companies’ losses have expanded over the past fiscal year (FY 2018 to FY2019) by 7.3x for Zomato, 6.1x for Swiggy and 2.5x for Curefit.

As per DataLabs estimates, the average percentage of layoffs in the total workforce in Indian startups is 22% for the past three months. On the positive side, the wrath of the pandemic on the startup ecosystem is not only being unleashed on employees and managers but in most cases, the founders are also carrying the cross. 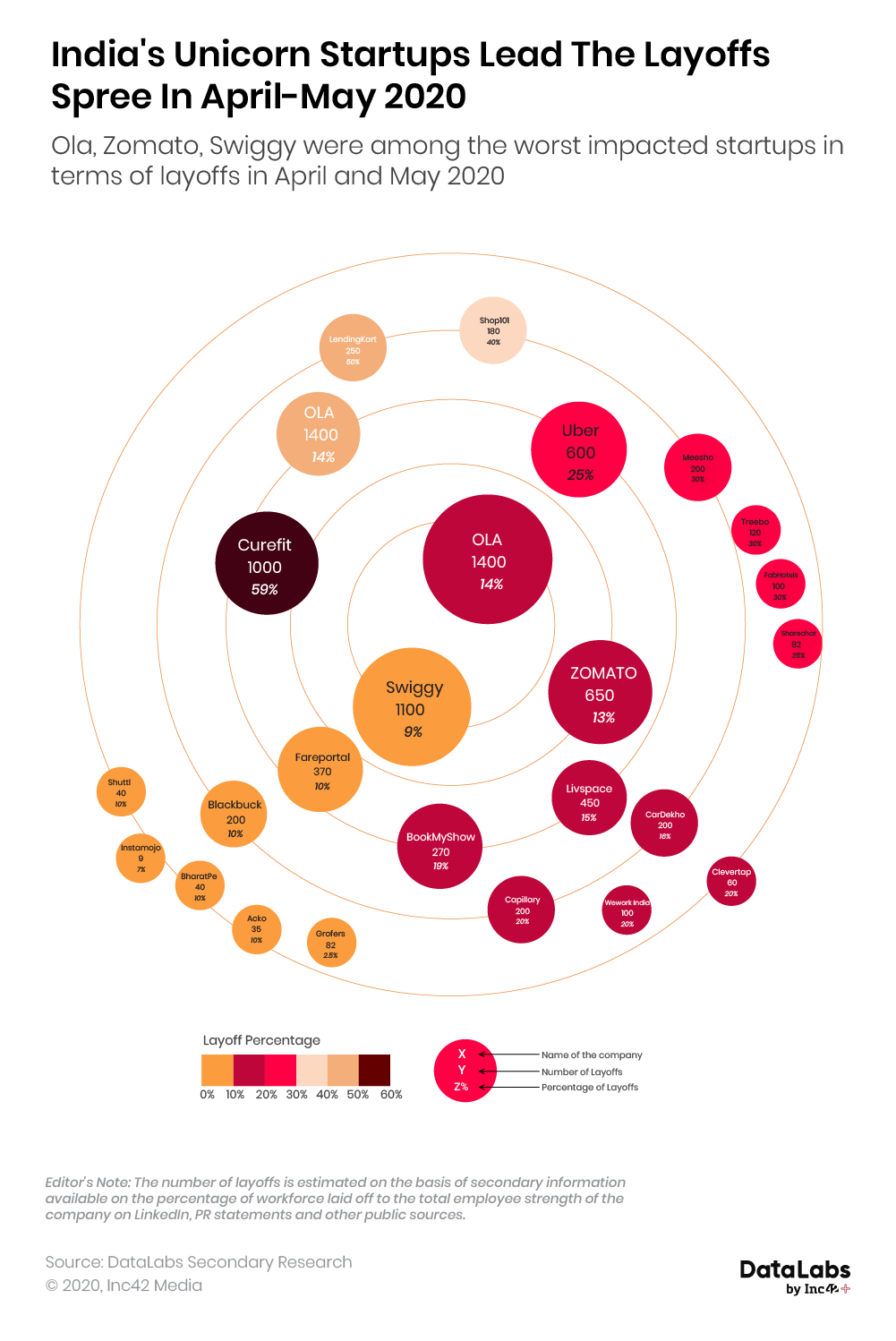 Rapidly growing the user base through paid acquisition and scaling up the business is only feasible when the markets are favourable. So such fairweather tactics have come undone as startups have realised that tightening the belt is the only way out. When the markets turn sour and liquidity dries up, the capital required to fuel scaling-up ambitions does not flow freely, if at all. The year-on-year growth of total expenditure in the Indian startup ecosystem has always been higher compared to the total revenue. In our latest report, we calculated the aggregate expenditure and revenue of Indian startups by taking a sample set of top 50 Indian startups which made more than 60% of the total venture capital market cap in India from 2014 to 2019. 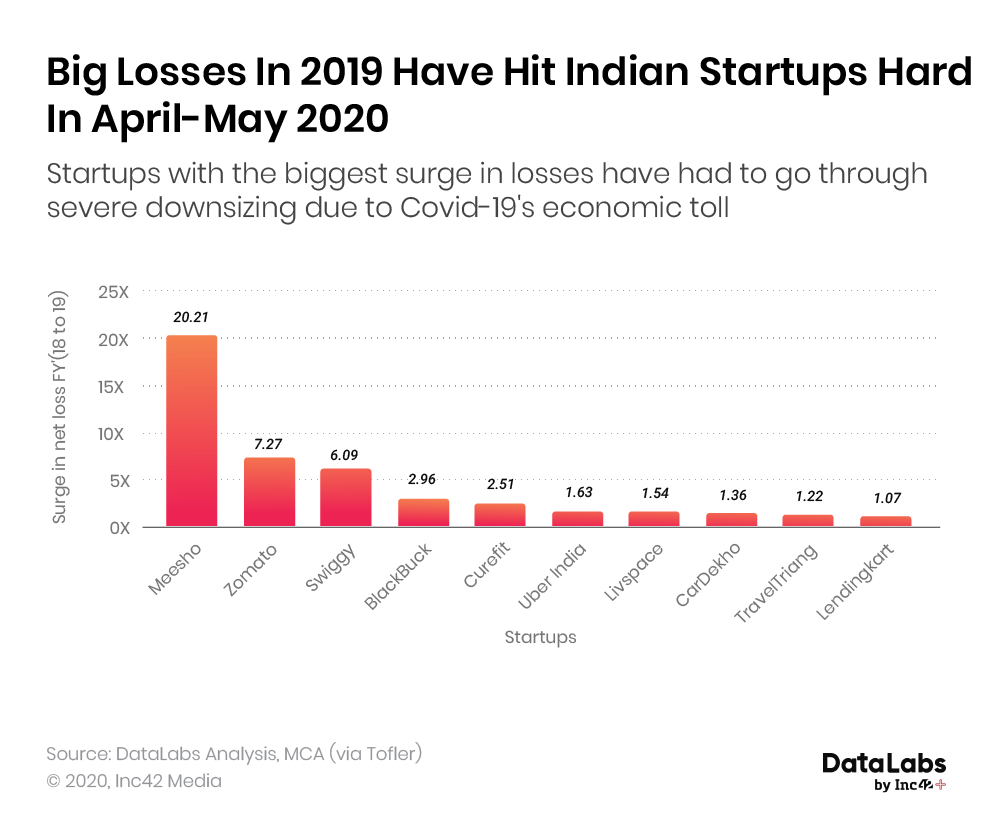 Between March 2017 and April 2019, the aggregate expenditure of Indian startups (top 50) surged 54% and while the story might be different with FY2020 numbers — which will be out in September this year — it’s unlikely that the losses have improved by much. In the same period, the aggregate revenue surge of 51% indicates that as overall, startups are operating at a loss. Certainly not the ideal way to get ready for lean months — even if no one could have anticipated a pandemic.

Given the drop in consumer spending from FY 2019 till this year, it can be argued that many of the consumer-facing startups should have been better prepared for a financial crunch. Over the past year or so, much of the investor focus has also been on sustainability. But the splurging of VC funds in the past few years has not held startups in good stead.

One For The Team: Founders, Employees Alike Suffer Pay Cuts 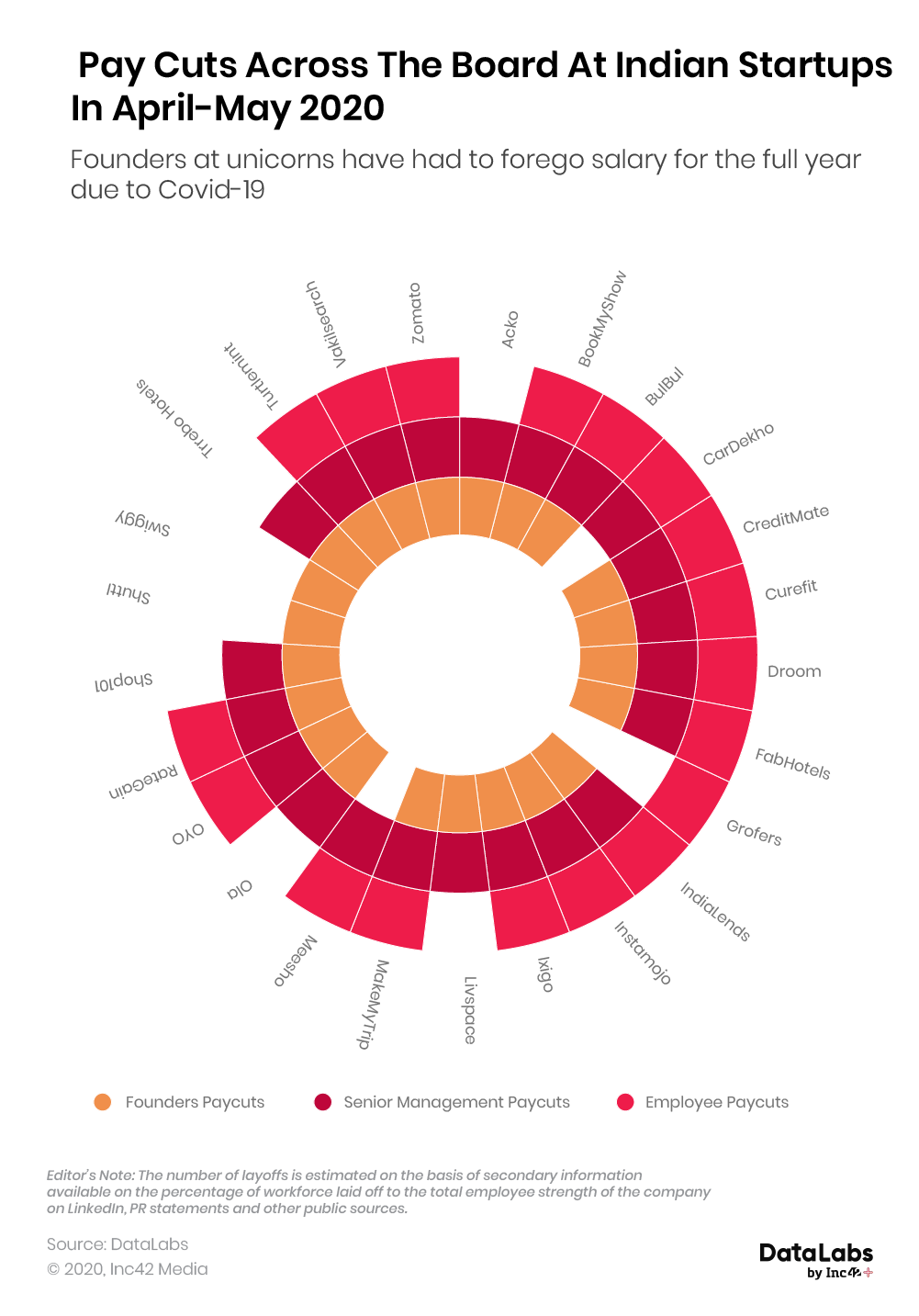 The fact that senior management and the founders have also had to bear the brunt of salary cuts indicates the gravity of the situation. Indeed, no one has faced a pandemic before and the cash crunch is so severe that many startups are expected to shut shop in the months to come.

Even investors don’t have the capital to invest freely as their funds are tied up in crashing stock markets. This is evident from the total funding raised by Indian startups from March to May 2020, which saw a massive dip in this period. The total capital inflow plunged by a whopping 55% from $1.05 Bn in March to just $474 Mn in April and by $222 Mn in May 2020. 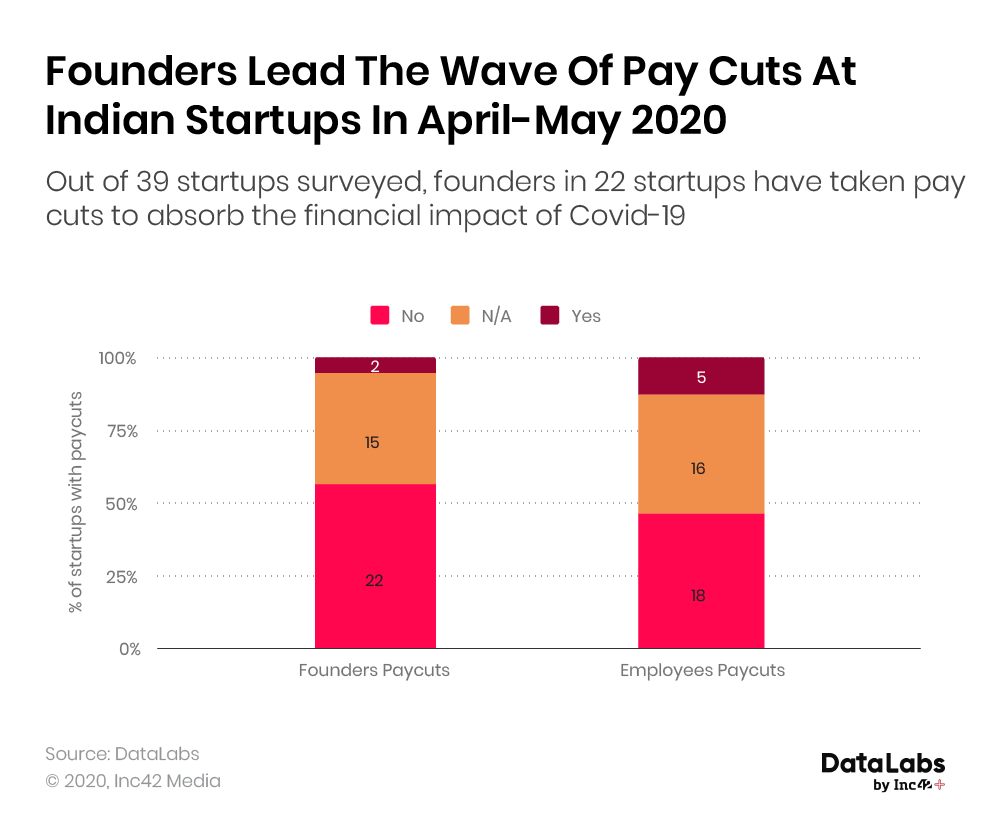 The average monthly growth rate of capital inflow in Indian startups was a staggering -39%. The negative rate indicates that the chances of a possible bounce-back are very bleak in the short term and one can only hope for a revival after the next two quarters (i.e. in Q4 FY 2020-21).

Future Implications Of The Present Crisis

The most popular way to attract top talent in the tech industry for a long time has been paying higher salaries and bonuses. The aggregate expenditure of employee benefit expenses in the Indian startup ecosystem witnessed a surge of 33% from $940 Mn (FY’18) to $1.25 Bn (FY’19). But in times when venture capitalists become frugal about funding, the pitch to talent requires a change too.

Besides resorting to innovative ways to raise the collective morale of their employees and keep the work culture alive, the reset in talent retention and recruitment in Indian startups has taken the form of bigger and more flexible ESOPs and promotions to long-term employees to the position of cofounder.

Although the ESOPs route has been in the industry for long, it has seen a revival as startups use it as a compensation for salary cuts. The second approach i.e promotion to the position of cofounder is something that has come out of the blue. Zomato, Licious, Paytm Money, DailyHunt and more are on the frontline of this new trend in India.

One thing is clear that the war for talent has entered a new phase in the post-pandemic world. Innovative thinking and strategies are needed at this hour to move out of stagnant waters. This is just the beginning of the crisis.

We expect more capital conservation methods to be adopted by startups as the economic slowdown will not dissipate for a few more quarters. Given the rising number of Covid-19 cases and the uncertainty over the vaccine, the negative sentiment of the investors is also expected to remain in place till the end of the year. With funding becoming scarce, startups may be caught in a cycle of layoffs and pay cuts, and the job market’s confidence in startups may also fade away.

With inputs from Nikhil Subramaniam
Infographics by Naga Jayadeep Akula

Editor’s Note: The number of layoffs is estimated on the basis of secondary information available on the percentage of workforce laid off to the total employee strength of the company on LinkedIn, PR statements and other public sources.