From a customer standpoint, hassle-free customer service is the most important parameter in both online pharmacy and the telemedicine space

In collaboration with Clootrack, DataLabs by Inc42+ analysed public conversations and discussions of online pharmacy and telemedicine users in India to gauge the consumer sentiment, explore below!

The internet has become a singular escape from the pandemic for many people still stuck at home in the face of a climbing number of cases on a daily basis. At a time when minimising human contact has become the biggest objective, digital platforms and internet products have become life-savers and essential.

Like in businesses, commerce and communication, even India’s healthcare ecosystem hurtling towards a digital future, backed by some very important policy decisions.

With policy for telemedicine clarified in March, there remain some roadblocks at the execution level such as tech illiteracy and lack of digital infrastructure, that are hindering the widespread development and adoption of such technology-enabled solutions. In order to customise offerings in telemedicine and online pharmacy suited to the needs of masses, decoding the decision-making stimuli for consumers is of paramount importance.

DataLabs by Inc42+ partnered with Clootrack to gauge the market sentiments for the new breed of telemedicine and online pharmacy apps in the light of this digital push for healthcare. With more and more consumers coming on board, how can telemedicine platforms and online pharmacy services lift their game in India and gain dominance amongst its peers?

If aggregation of digital content and aiding discovery of doctors was the stepping stone for healthtech in India, the next step is the advent of online pharmacy in India. Between 2014 to 2019, out of the total $2 Bn invested in Indian healthtech startup, 22.4% (462 Mn out of $2 Bn) was poured into online pharmacy startups such as Medlife, 1Mg, Pharmeasy and Netmeds, who are also the top players in the sector, according to India’s healthtech landscape report.

The online pharmacy also had the single highest average ticket size of funding ($15 Mn). This is a clear indication that when it comes to putting down big-ticket cheques, online pharmacy is a primary option for Indian healthtech investors, given how closely it is linked to the more mature ecommerce and logistics infrastructure besides the consumer appetite for online shopping.

Over the years many companies who started off as an online pharmacy have diversified their offerings into areas like doctor consultations and pathological tests or lab consultations. In the near future, the models of telemedicine and online pharmacy sectors are poised to overlap for many of the leading startups as they are closely linked. Many medicines can only be procured with a prescription, and most online pharmacies are looking at expansion and diversification to sustain amid the current demand spike.

The Consumer Side Of The Story

In collaboration with Clootrack, we analysed a sample set of 10,331 public conversations and discussions of online pharmacy users in India to gauge the consumer sentiment. Quality customer service and easy return policy were the top key drivers for this segment. 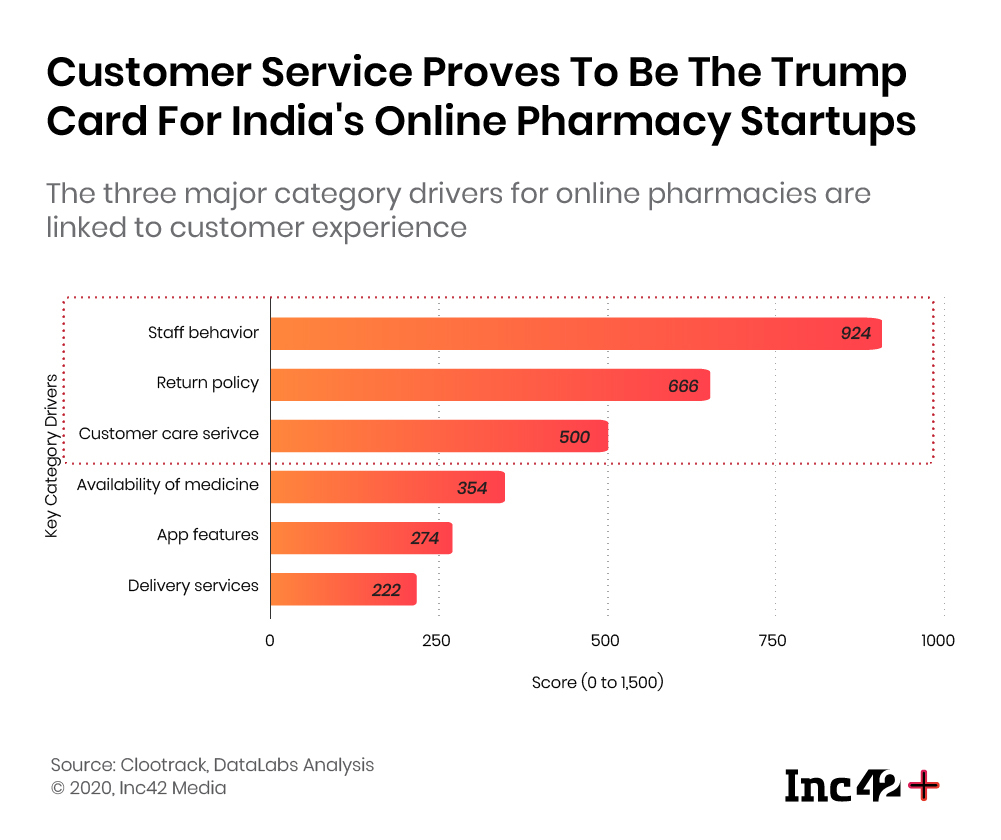 When comparing the two primary contenders — 1mg and PharmEasy — 1mg emerged on top in 4 out of 6 parameters. But ‘staff behaviour’ and ‘customer care service’ were still significantly better for Pharmeasy as per consumers, whereas 1mg scored higher in terms of the app features and the delivery service and availability of stock. Most importantly, since cost isn’t a factor, most online pharmacy consumers are happy to pay for convenience in this category, and thus, discounts are not a driving factor for online pharmacy, unlike ecommerce or food delivery. 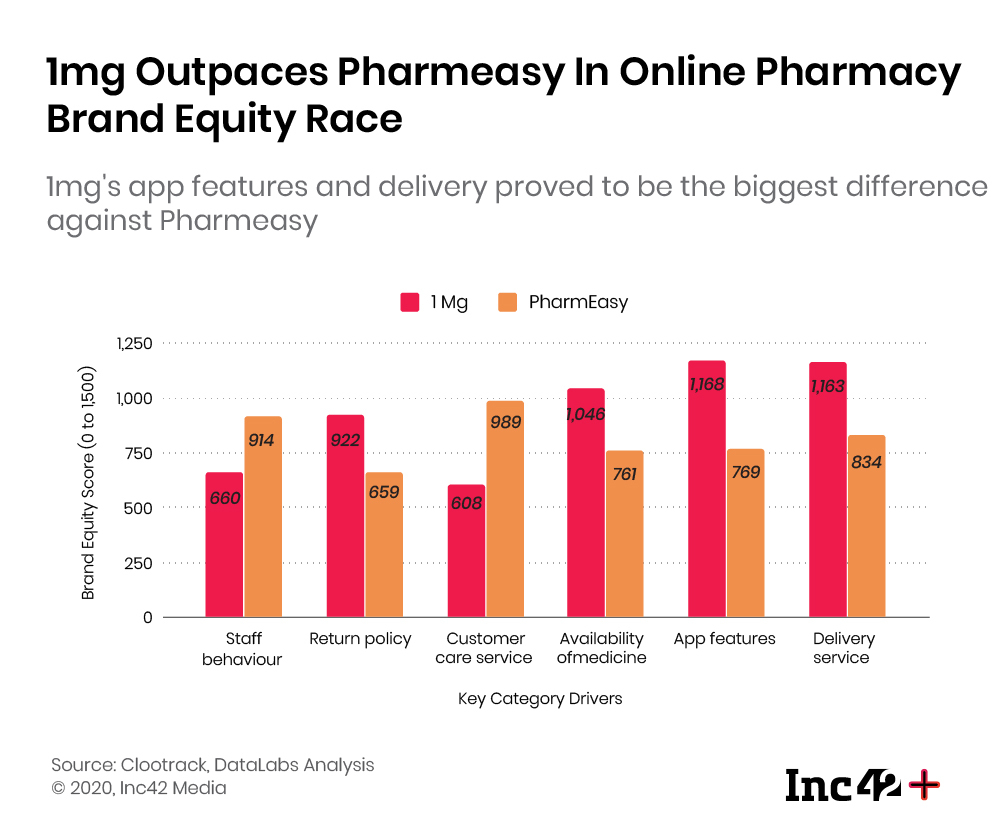 App Quality And Value For Money Clicks In Telemedicine

Telemedicine was playing at the edges of the Indian healthtech cauldron, and the Covid-19 pandemic has brought it to the mainstream. The adoption of telemedicine has also gone up by several degrees in the Indian market in recent months.

According to DataLabs by Inc42+, the telemedicine market in India is expected to reach a market value of $5.4 Bn by 2025 with a CAGR of 31% from the current year. With the likes of Practo, Lybrate and DocsApp, it won’t be incorrect to say that startups introduced telemedicine to urban India. The ease of consulting a doctor from your home and getting medicines delivered has become second nature to many Indians in cities, and the norm in the aftermath of Covid-19.

Post the pandemic, the use of telemedicine is expected to increase at least for primary consultation and basic lab test consultations. Online discovery, doctor recommendations and bookings acted as the gateway for telemedicine in the context of Indian market, and now the segment is ready to mature from a revenue and user point of view as well. 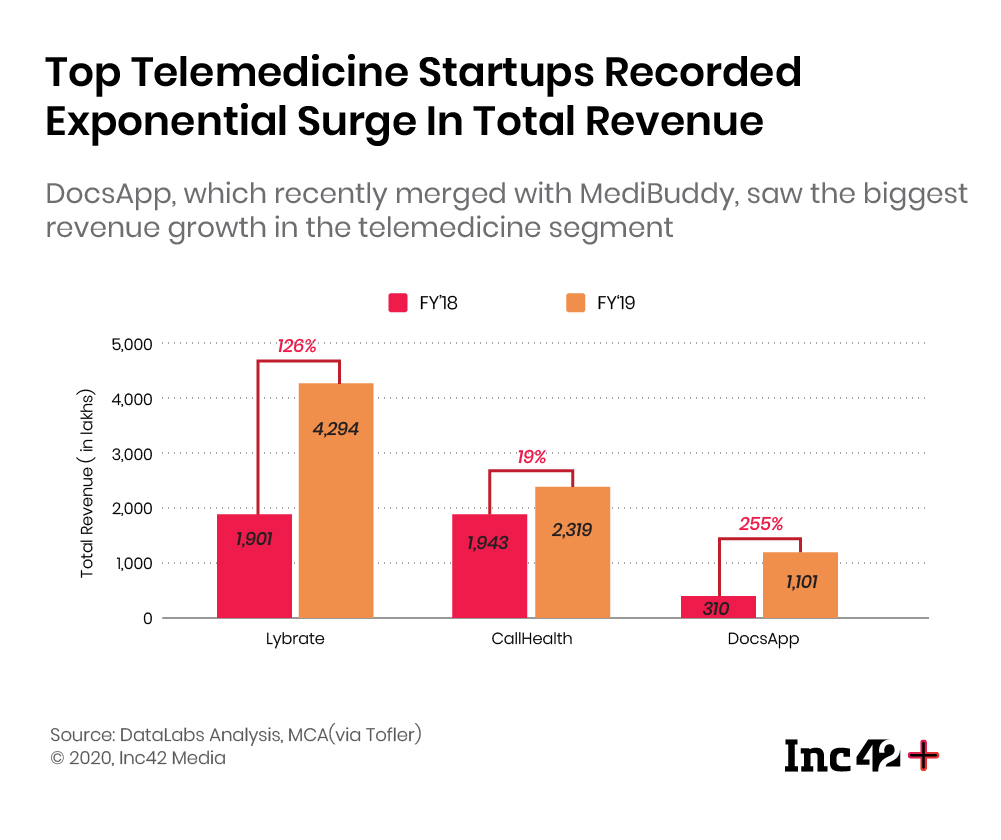 The Consumer Side Of The Story

To understand the consumer side of the story, we have analysed 17,863 conversations from telemedicine service users in India.

Based on our analysis, the top drivers for this segment are app quality and value for money. Interestingly, Indians are choosy about the pricing for telemedicine services while for online pharmacy, value for money is not amongst the top-five factors. 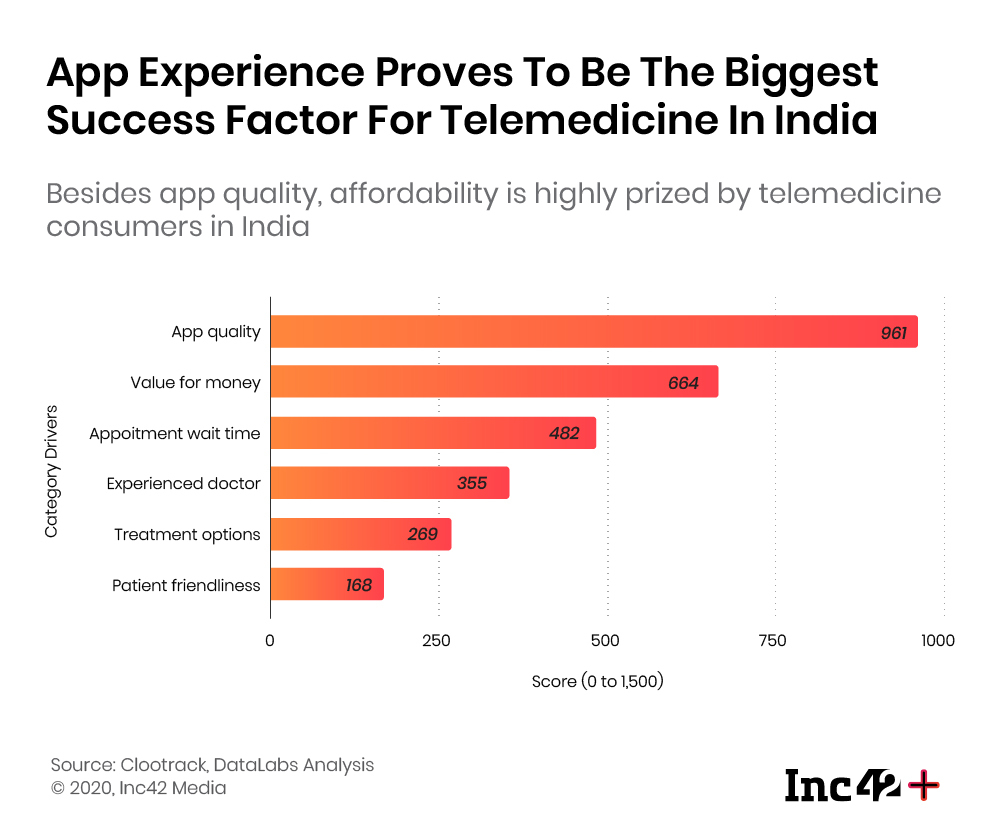 Like in the online pharmacy sector, the technology and the app features are crucial success metrics in telemedicine. In contrast, patient friendliness is lower on the list, indicating that most people are not paying attention to the quality of service and are mostly satisfied with the mere availability of the service. 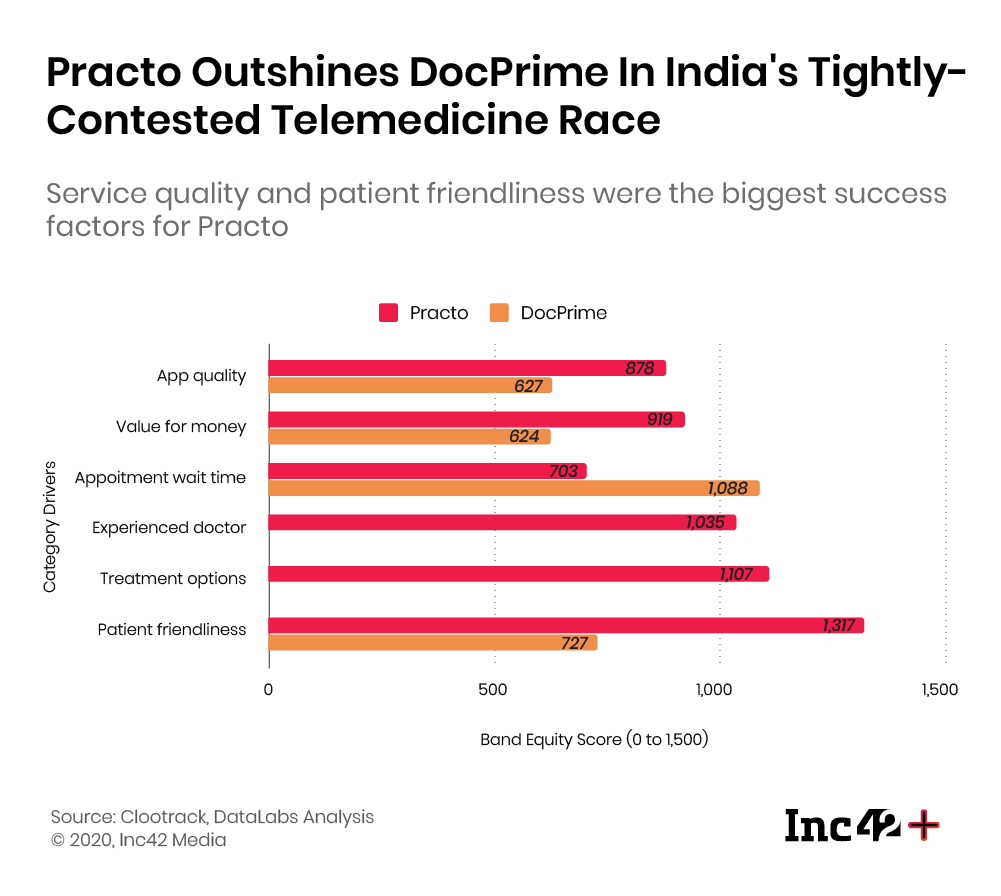 Overall, it can be concluded that hassle-free customer service is the most important parameter for customer satisfaction in both online pharmacy and the telemedicine space, and in the case of the latter, value for money or affordability is also a key factor.

This gives healthtech startups a clear understanding of the focus areas and the factors that are driving consumers as well as retention.

“Telemedicine has not been a highly successful revenue model. We position ourselves as a telemedicine company. That is our core product of focus. However, the source of revenue is more from Goodkart, which is our ecommerce platform,” Saurabh Arora, founder and CEO at Lybrate, one of the leading remote healthcare startups in India, told Inc42 in an earlier interaction.

Despite the increase in demand from urban centres, telemedicine as a core and standalone model is not majorly prevalent in the Indian market. Even for core telemedicine players, the revenue streams need to be diversified. Practo, for instance, has a SaaS offering for healthcare providers to digitise their hospitals and clinics for a monthly subscription. Ancillary services such as lab tests, health checks also keep the revenue coming.

To further understand the consumer side of the story for the overall healthtech market in India, DataLabs by Inc42+ has formulated the insights based on various parameters including brand recall and market awareness through sentiment analysis in our latest report.